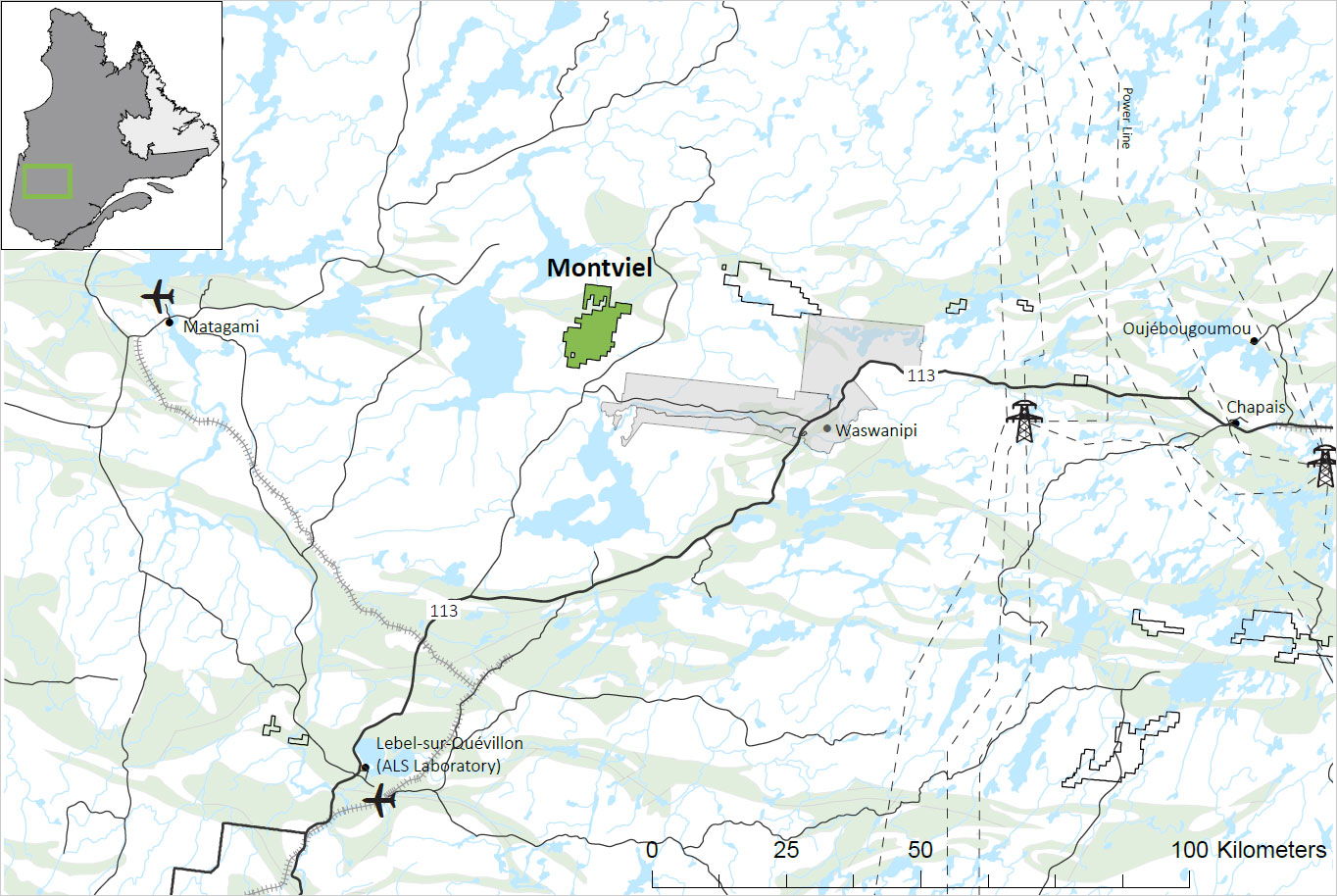 Montviel benefits from public infrastructure and available labour in the immediate area. The Project site is located approximately 100 km north of Lebel-sur-Quévillon (pop. 2,800) and 45 km west of the Cree First Nation of Waswanipi (pop. 1,800) in the urbanised southern part of Northern Quebec.

The Project carries a 2% net royalty to NioGold Mining Corp. (TSX.V: NOX). There are no environmental liabilities pertaining to the Project nor is the Project subject to any litigations. The only permits required to conduct work are the forestry management permits. There is no mining infrastructure on the Project site.

The project is comprised of 178 cells, for a total of approximately 9,910 hectares.

Montviel has permanent access via a network of oversize logging roads, after a 57 km drive from highway 113, which connects Val d’Or and Chibougamau. Heavy equipment can be mobilized by truck directly to the Project site. 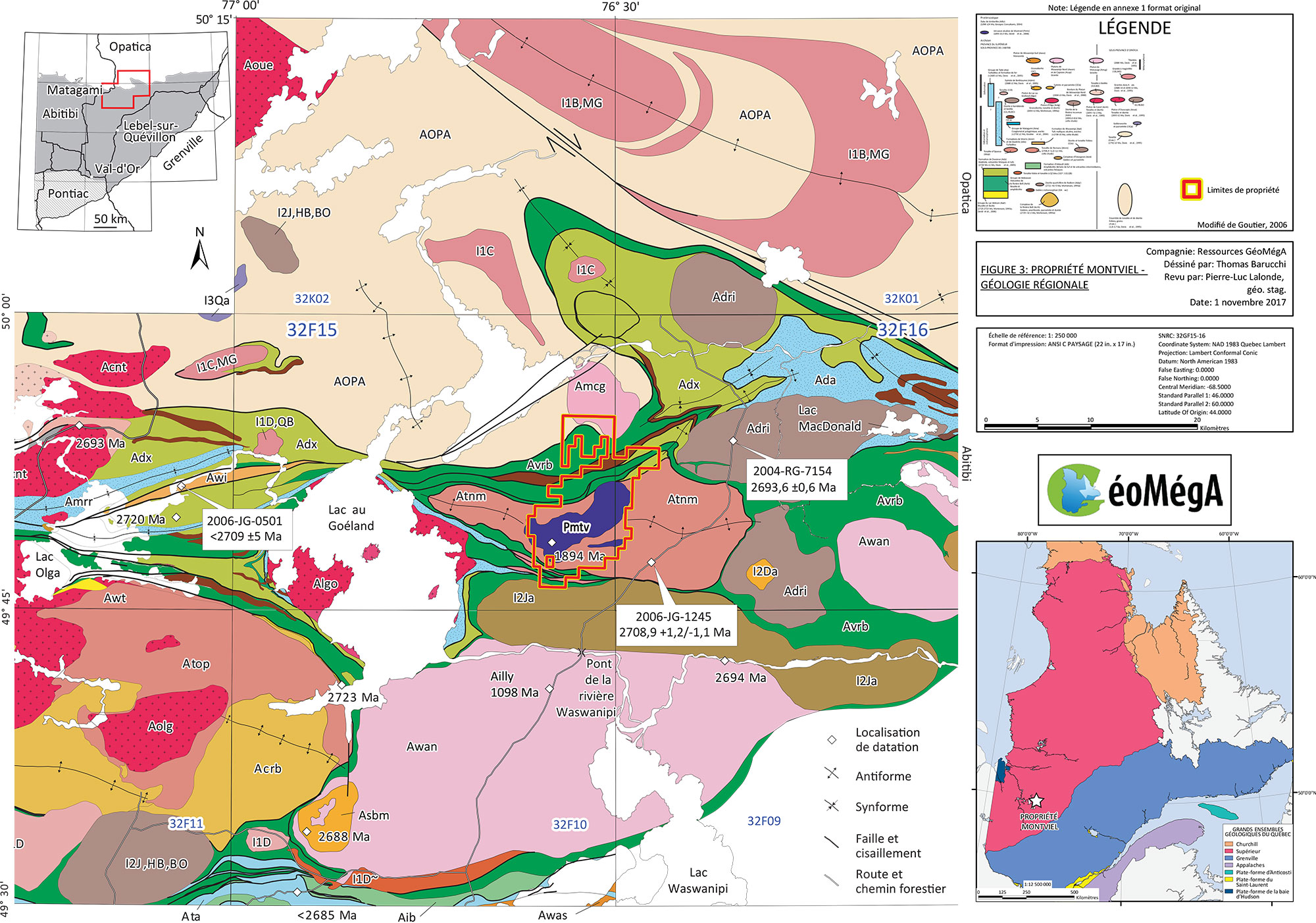 Montviel is located in the eastern part of the Superior geological province, at the junction between the Opatica and Abitibi sub-provinces. The Montviel alkaline intrusion, dated at 1,894 Ma, is enclosed in the Nomanstonalite, dated at 2,708.9 Ma.

It is mainly composed of a carbonatite intrusion measuring approximately 10 x 3 km for a total of 32 square km. The ferrocarbonatite Core Zone,where the highest REE and Niobium values have been found to date, covers an area of approximate 3 square km. To date, GéoMégA has defined the REE/Niobium mineralized ferrocarbonatite over a length of 900 meters (NE-SW), a width of 650 meters (NW-SE) and vertically up to 750 meters in depth. 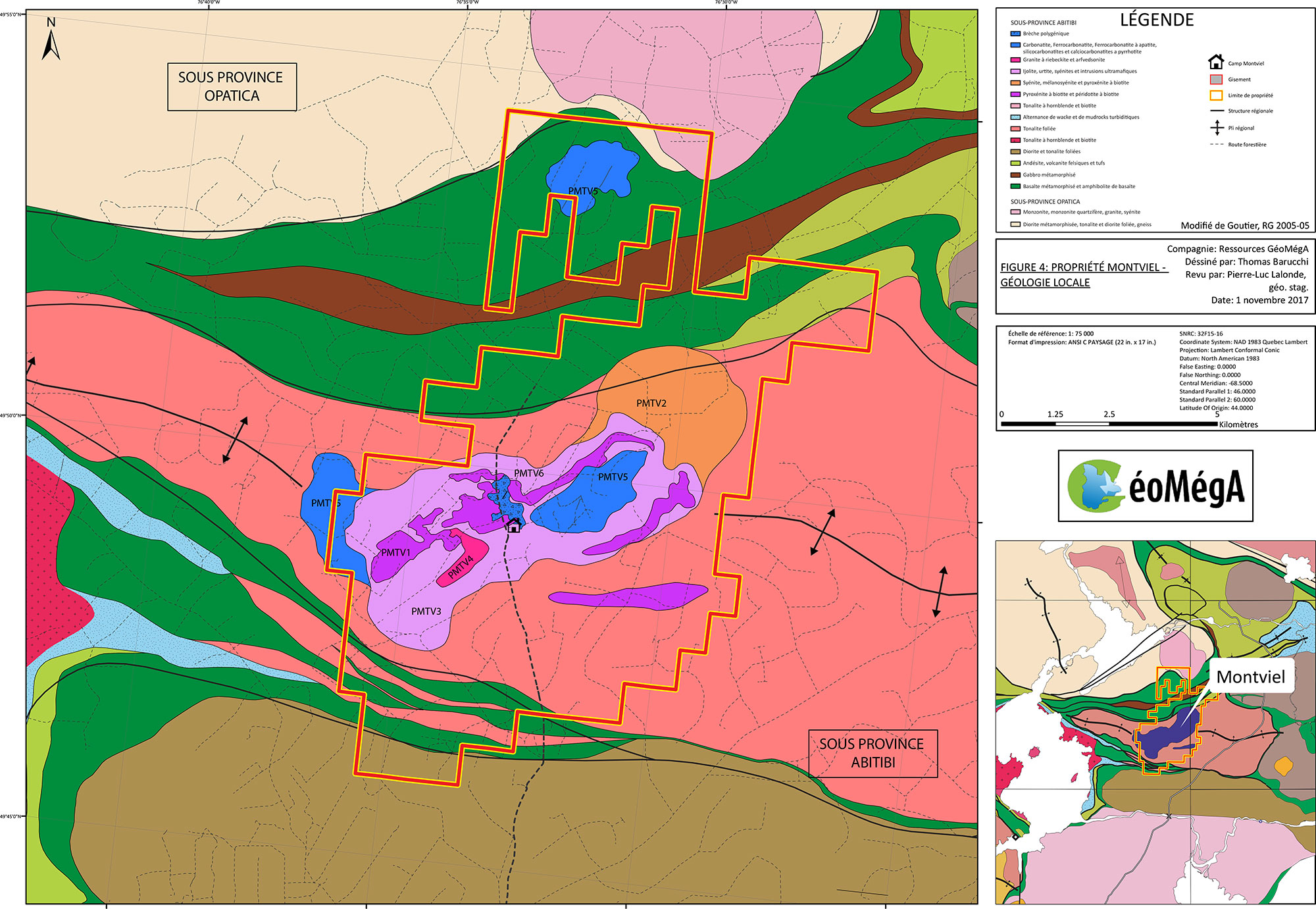 Located on the southern margin of the Core Zone, the heavy REE zone (“HREE-S Zone”) was intersected by five (5) drill holes over a length of 350 m (East-West), 20 m wide (North-South) and 230 m vertically. The zone remains open at depth.
The heavy REE enriched minerals are fluorocarbonates similar to those found in the Core Zone. The 3D modeling and the mineralogical and geochemical characterization, realized in collaboration with the “Université du Québec à Montréal”, resulted in a geological interpretation of the HREE-S Zone. 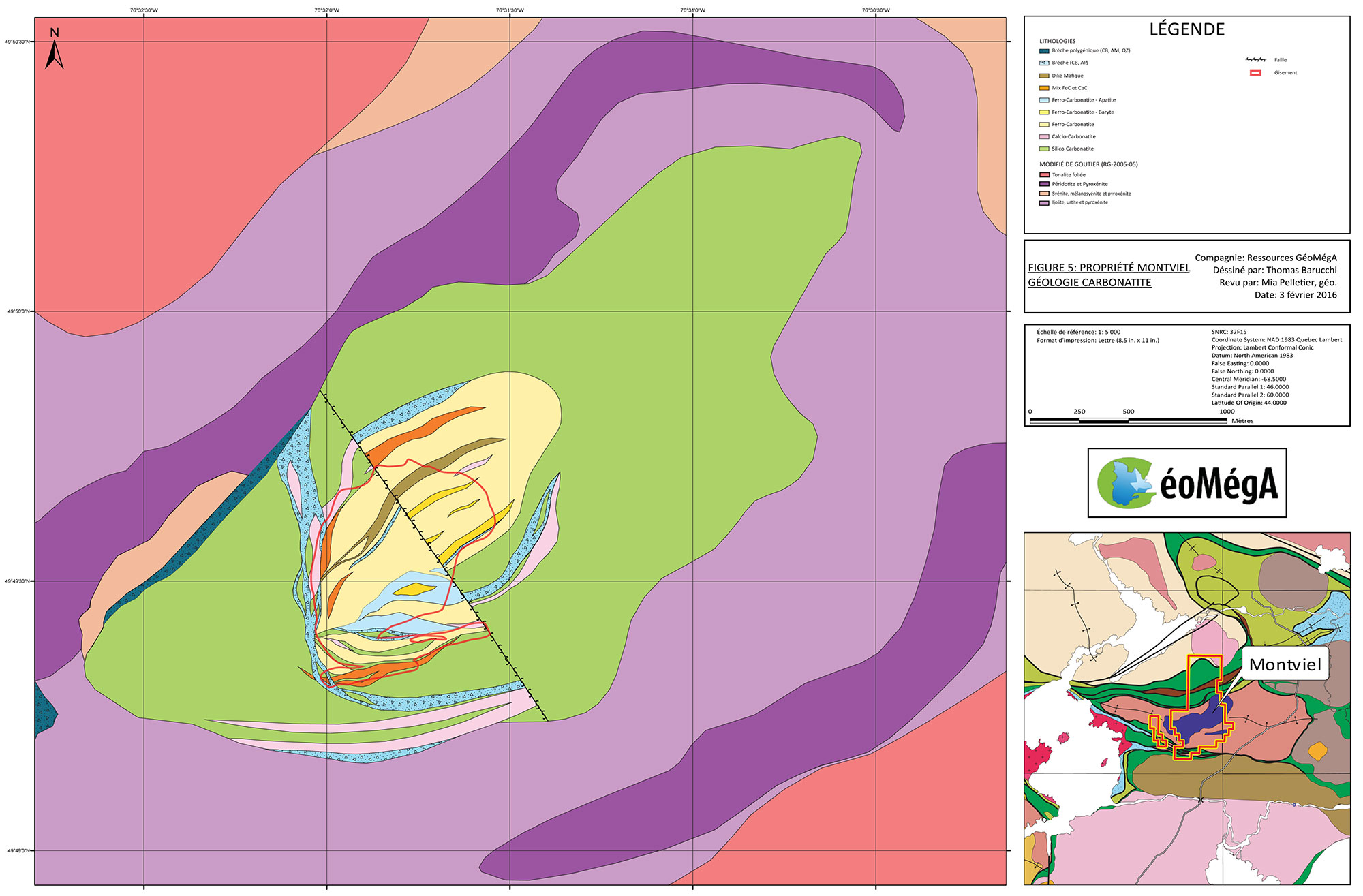 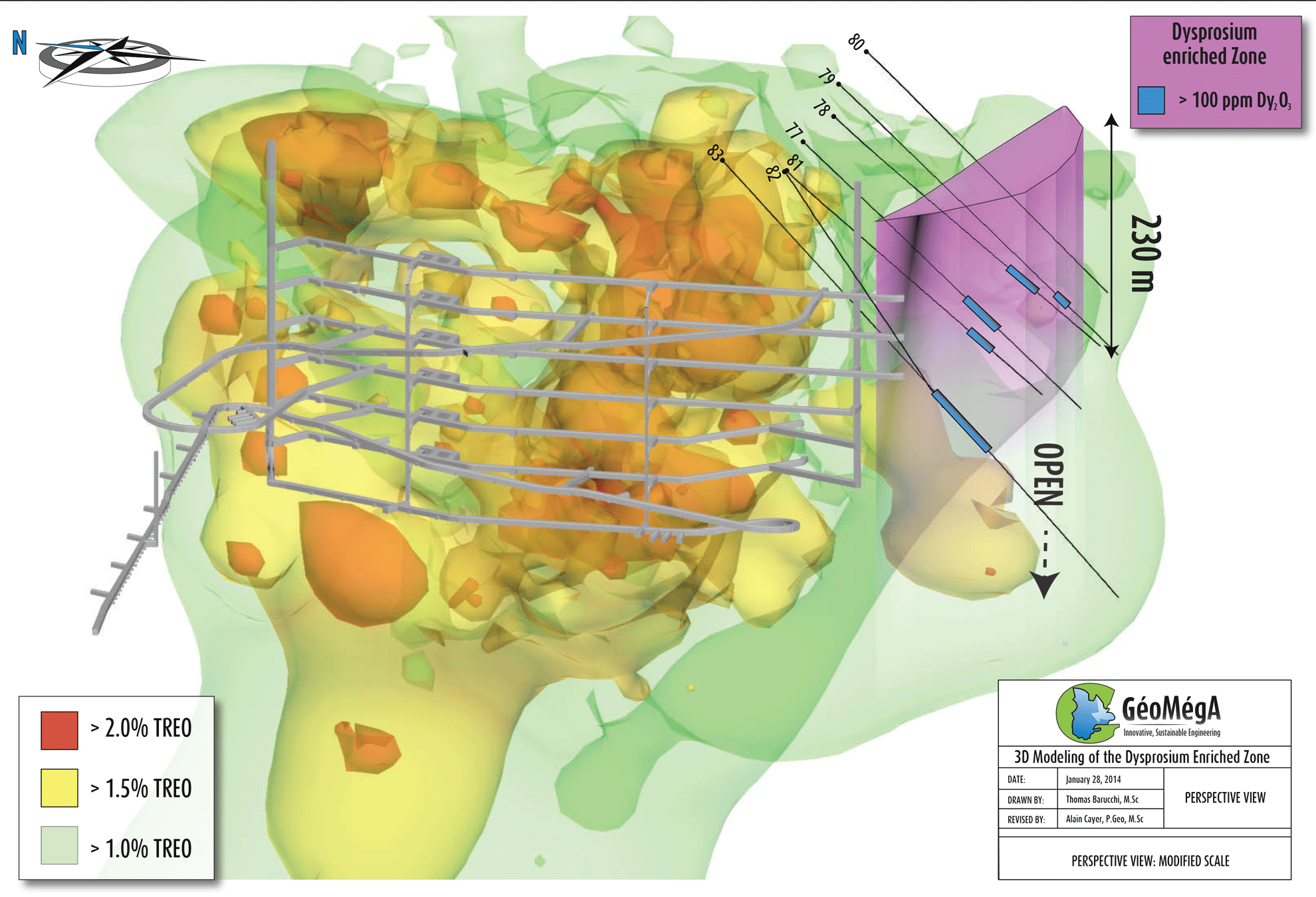 In addition, this work identified a new heavy REE zone, located on the North-western margin of the Core Zone.

“The width of the HREE-S Zone, and the preliminary interpretation of a 2nd zone, confirm the excellent potential of the Montviel carbonatite to contain heavy REE enrichment.” comments Alain Cayer, Vice-President Exploration of GéoMégA.

Drill holes MVL-13-80 and MVL-13-82 completed Phase 3 and defined the east and west extremities of the HREE-S Zone.

Click on the links below to open the corresponding sections (Surface plan with the drill section grid in the previous section “Core Zone”):

Loading time of the 3D model may vary depending on the internet connection speed.
3D Model Montviel June 17, 2015
This preliminary 3D modelling helps spatially visualize Montviel deposit and the proposed access ramp.
This model and any associated infrastructure in it is subject to change in the future without any prior notice.
Resource Estimate 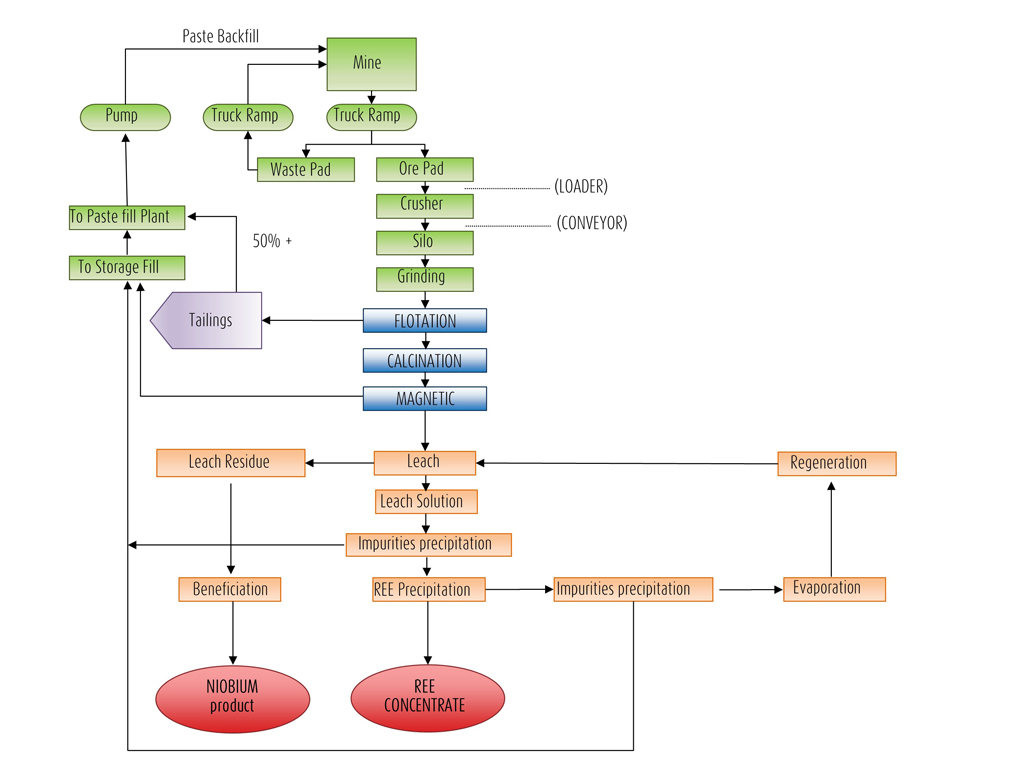