Rare Earth Elements (REE) are a group of 15 elements called the “lanthanides” out of which 14 are naturally occurring and stable elements.

Two other elements, Scandium (Sc) and Yttrium (Y) are often grouped together with REE due to their similar properties.

In total, this group of 17 elements has very unique chemical and physical properties due to variation in electron configuration between the individual REE. 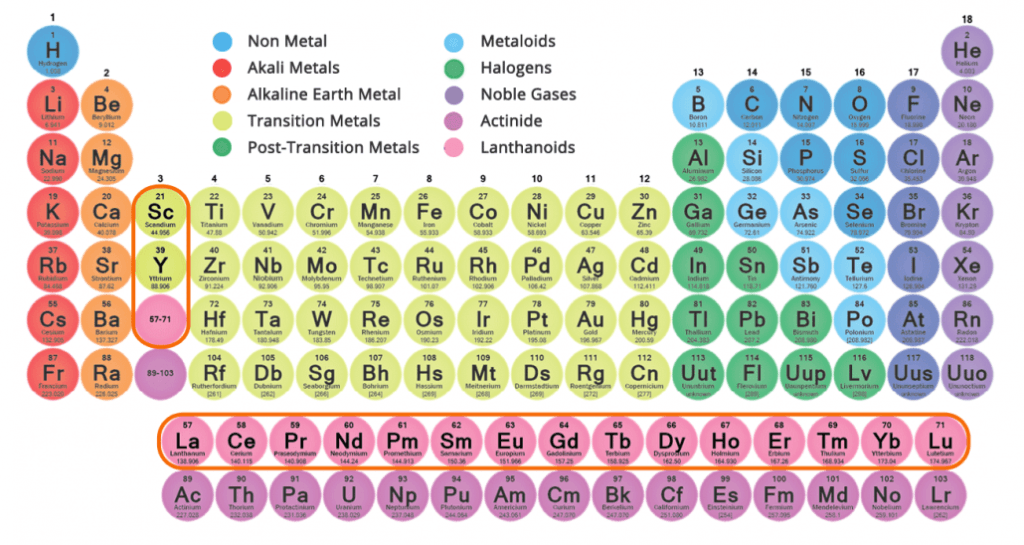 REE are not rare as their name might imply and have abundancies in the Earth’s crust that range from as high as that of Copper, Cobalt and Lithium and to as low as that of tin.

They are much more abundant than gold, silver and platinum. The challenge in REE and what makes them “rare” is the difficulty of separating them into single elements of high purity due to their chemical similarities.

REE are found within several minerals, the most common sources being bastnäsite, monazite and xenotime. All the 16 naturally occurring REE tend to occur together in these minerals typically at concentrations of several percentages by weight with varying distribution of the individual elements.

Lanthanum is a key component in batteries for hybrid vehicles, computers, and electronic devices. Its physical and chemical properties enable it to be used in a variety of other products. Lanthanum is utilized in hydrogen fuel storage cells, special optical glasses, electronic vacuums, carbon lighting applications, as doping agents in camera and telescope lenses, and in polishing glass and gemstones. It also has major applications in petroleum cracking, and as an alloy for many different metals.

Praseodymium is most widely used as an alloying agent with magnesium for high-strength metal applications in aircraft engines. It is also used in super magnets, catalytic converters, UV protective glasses, carbon arc lights, and CAT scan scintillators. The element is additionally used as a doping agent in fibre optic cables, and in several metal alloys.

Neodymium is essential in the production of the world’s strongest super magnets, which are present in hybrid cars, state-of-the-art wind and tidal turbines, industrial motors, air conditioners, elevators, microphones, loudspeakers, computer hard drives, in-ear headphones, and guitar pick-ups. When combined with Terbium, or Dysprosium, a Neodymium magnet can withstand the highest temperatures of any magnet, allowing the element to be used in electric cars. Neodymium has many additional uses. It is utilized in incandescent light bulbs, cathode ray tubes, as a glass filter and colorant, as a doping agent in Yttrium-Aluminum-Garnet lasers, and for glare-reduction in rear-view mirrors.

Promethium was the last of the rare-earths family elements to be discovered. In 1902 the Czech chemist Bohuslav Brauner (1855-1935) improved Mendeleyev’s period chart by extending it downward after Lanthanum. He predicted the existence of an element in between Neodymium and Samarium. Natural promethium is very scarce and all its isotopes are radioactive. Promethium has a limited number of applications for which it is typically synthesized from uranium.

The major commercial application of samarium is in samarium-cobalt magnets which have permanent magnetization second only to neodymium magnets; however, samarium compounds can withstand significantly higher temperatures, above 700 °C, without losing their magnetic properties. Radioactive isotope samarium-153 is the major component of the drug samarium (153Sm) lexidronam (Quadramet) which kills cancer cells in the treatment of lung cancer, prostate cancer, breast cancer and osteosarcoma. Measurements of samarium and neodymium isotopic ratios are used for geological dating of rocks and meteorites.

Europium is the most reactive of the rare earth elements. It rapidly oxidizes in air: bulk oxidation of a centimeter-sized sample occurs within several days. It resembles calcium in its reaction with water.

When added to iron, chromium, or related alloys, gadolinium greatly improves the workability and raises resistance to high temperature oxidization. It is also utilized in microwave applications, CDs, computer memory devices, MRI image enhancing, neutron radiography, and for making phosphors in TV tubes. One final use of Gadolinium comes in nuclear reactors as an emergency shut-down mechanism.

Terbium is used in colour TV tubes and fluorescent lamps as a green phosphor. In combination with Europium blue and red phosphors, the three create trichromatic fluorescent lighting, which is much brighter than conventional fluorescent lighting. Another green application for Terbium can be found in combination with neodymium for production of the world’s most heat resistant super magnets. The element is also used in alloys, crystal stabilizers in fuel cells that operate at high temperatures, specialty lasers, and to dope calcium fluoride, sodium borate and strontium molybdate materials. Terbium is a component of Terfenol-D, a material that is used in transducers, high-precision liquid fuel injectors and in a new form of audio equipment that has the potential to revolutionize the speaker industry.

Dysprosium’s thermal neutron absorption cross-section and high melting point enable it to be used in nuclear control applications. The element can be added to Neodymium-Iron-Boron magnets to raise the strength and corrosion resistance of applications like drive motors for hybrid electric vehicles. Like terbium, dysprosium is a component of Terfenol-D; a very promising material for future technology applications. It is also used in CDs, chemical reaction testing, laser materials, and dosimeters.

Holmium has one of the highest known magnetic moments. The element is imperative in the creation of the strongest, artificially generated magnetic fields. Holmium is also used in nuclear control rods, solid-state lasers in eye-safe medical and dental microwave equipment, and as a yellow and red glass, and cubic zirconia colorant.

Erbium is used in neutron-absorbing control rods, creating lasers for cutting and welding, and as a doping agent for optical fibers. As an alloy additive, Erbium lowers the hardness and improves the workability of numerous metals. In oxide form, the element is used as a pink colorant in glass and porcelain enamel glazes, and it is often used in photographic filters.

Thulium is the 2nd rarest of REEs, only next to Promethium, which almost does not occur naturally in the earth’s crust. Because of its scarcity and high price, there are few widely-used Thulium applications. Its current uses are mainly scientific experimentation, and in portable x-ray devices used for areas where electric power is not available.

Ytterbium is used in solar cells, optical glasses, crystals, and ceramics. It can be utilized as a doping material for high power solid-state lasers and as an alloy that helps to strengthen stainless steel. Like thulium, ytterbium is employed in portable x-ray machines where electricity is not available.

Lutetium is mainly used as a catalyst in refining petroleum, hydrogenation and polymerization processes, and in organic LEDs. Lutetium is currently being investigated as an agent for possible cancer treatments. It is also used in x-ray phosphors and computer memory devices.

Scandium is predominantly used with aluminum to form scandium-aluminum high strength lightweight alloys. This alloy has applications in the aerospace industry for plane frames and in sports such as bicycling, baseball, golf, etc… Scandium is used in high-intensity discharge (HID) lamps to provide daytime-like color for television, in lasers and in dentistry.

Yttrium has a wide range of uses with one of the most important being in the production of phosphors for energy efficient fluorescent lamps and LEDs. Yttrium compounds are used as host lattices for doping with different lanthanide cations to produce the red and the green color with Eu3+ and Tb3+ respectively. Yttrium is used in the production of a large variety of synthetic garnets which are used as microwave filters, gemstones, high power lasers used for precision cutting, welding, etching, boring and targeting. Yttrium is used to provide a high temperature corrosion resistance in cutting tools. Other uses include solid electrolytes, electrodes on high-performance spark plugs, catalysts, in aluminum and magnesium alloys, deoxidizer of non-ferrous metals, stabilizer of zirconia in jewelry and as a replacement for thorium in gas mantles for propane lanterns. It has a high melting point, it imparts shock resistance and low thermal expansion characteristics making it applicable in ceramic and glass formulas including camera lenses. In medical applications it is used for cancer and inflamed joints treatments and as high precision surgical tools.