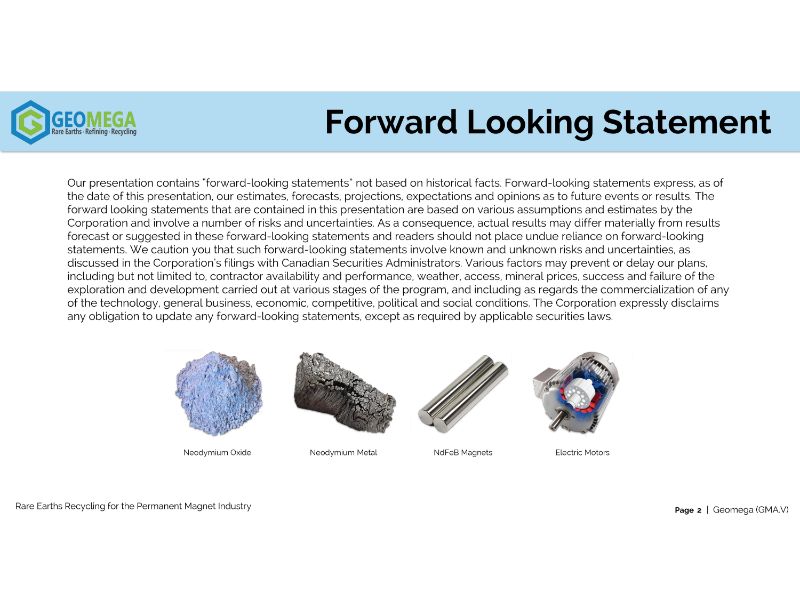 “What you see on the left is one thing we produce: neodymium oxide. That’s the main oxide of rare earth elements that go into building magnets. The neodymium metal goes into magnets, and the magnets go into motors — that’s the main driver of this entire sector… The most important thing that I want you to see there is the 95% recovery of main reagents. That’s how much we recover and that’s why we can be economic with China.” “If we go about what GeoMegA is today, then we have a rare-earth processing technology developed by our private subsidiary INNORD and we also have Montviel, which is a 43-101 large resource of a carbonatite-bastnasite. It is the largest in Canada. Why are we here? Really, it’s because of the ISR technology that we developed over the last five years. Most importantly, you need to understand that this technology is clean and it is sustainable because it gives us an opportunity to produce rare earth elements without having to ship all our material to China, where we have no control over how they are processing it and what kind of pollution it creates.” … “Feed material — I just told you there are two main ways of getting this. The primary is from magnets. When you make a magnet, you make it into a block and then you have to cut it. You cut it into sections and then into the final form of that magnet. You also have a lot of end-of-life material. Where is this end-of-life coming from? It’s coming from turbines, it’s coming from electric motors, and many different applications including your cell phone. That is the circular economy of the rare earth industry that exists today in China, but doesn’t exist outside of China. Nobody is talking about it. People are starting to talk about it because we started talking about it five years ago! Today, we are slowly starting to see the US government, the Canadian government, and the European Union are all waking up to the reality that you do need to go after the circular economy behind rare earth elements. At every stage from the day that you produce oxide and send that to the metal manufacturer, the metal manufacturer produces waste. That waste goes back to us. The metal then goes to the magnet manufacturer who makes those special shapes for the different motors and that produces more waste. That waste goes back to us. Then the final product goes to the manufacturer, whether it’s cellphones, wind turbines, or electric motors. And then there is disposal. At the end of the disposal stage, there is still a collection and that collection point is missing today because nobody is there to buy the magnet waste. We are the first ones to do it and that’s why we are going to set up this full closed-cycle within North America and pretty much everywhere outside of China. We already have agreements, although I won’t get into the details of that now, with European companies and US companies.”